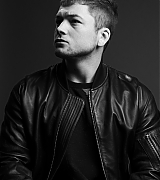 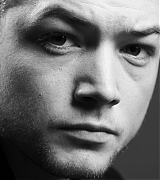 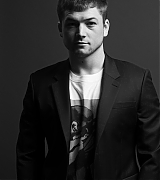 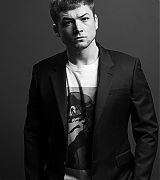 Taron Egerton stands a lean, muscular five foot eight inches tall and he has the type of cheeky grin that will let him get away with murder. At the age of just twenty-four, since coming out of RADA, Egerton has two television series under his belt and three big-budget films The Rise of the Krays, Testament of Youth (which saw him nominated for Best Newcomer at the BFI London Film Festival Awards) and Kingsman: The Secret Service, an upcoming British action film adapted from Dave Gibbons and Mark Millar’s comic book The Secret Service, which sees Taron co-lead with the nation’s most-loved actor, quintessential English gentleman, Colin Firth.

Meeting Taron is a pleasant reversal of expectations. Not that I thought he was going to mirror the east London juvenile delinquent he’s playing in Kingsman: The Secret Service IRL, but you know, it’s always hard to pre-empt the situation. “Brooke meet Taron,” his publicists voice rang through the room. I had just stuffed my mouth with half a tube of Smarties, so it wasn’t the way I envisioned myself meeting a guy who’s sure to be listed in GQ’s hot one hundred in a matter of months, but we continue all the same.

Despite hailing from Aberystwyth, Taron doesn’t have the guttural Welsh accent I was expecting, he’s actually very well spoken. In conversation he frequently lets out a sonorous laugh that instantly makes you warm to him, whether he’s talking about his childhood (“I was cheeky in school, but rarely in a way that would get me in trouble. I thought I was a bad boy but I most definitely wasn’t!”), working alongside Samuel L Jackson (“He is officially the coolest man on the planet, isn’t he?”) or talking about his pastimes (“I don’t really have any cool or interesting hobbies – I wish I was that interesting.”) That’s another thing I note about Taron, he’s awfully modest.

Judging by his recent success, it may come as a surprise that Taron was a latecomer to the realm of performance. “I was always pretty arty when I was younger, I liked drawing and stuff, but I didn’t start acting until my mid-teens,” says Taron. “I joined the Youth Theatre and realised how much I liked it.” But starting late has by no means stopped him. Since leaving RADA in 2012 Taron has been fully immersed in his art. Starting with a play at the National Theatre, Taron’s first television role in ITV detective drama Lewis came next, followed by a part in ‘No Quarter’ at the Royal Court Theatre and another in Sky1’s firefighting drama, The Smoke.

In the midst of this whirlwind of events, Taron found himself auditioning for the lead role in a film directed by the mastermind behind Snatch, Layer Cake and Lock, Stock and Two Smoking Barrels. None other than Matthew Vaughn (whose wife Claudia Schiffer offered to make Taron a sandwich at their country residence). Vaughn took a chance on the then unknown actor and after watching the first three scenes of the film, it’s easy to see why he did. “He called me one morning and just said: ‘Look I think we’re about to offer you this part’. But I think it took him quite a lot to convince the other people who had money in the film, he really fought my corner,” says Taron modestly. “Matthew is a bit of a genius in my eyes. There’s no crap with him and he says exactly what he thinks when he thinks it. Being the sensitive little daisy I am, it took me a while to get used to that, but when you get to know him you realise he’s actually got the biggest heart in the world. He’s done so much for me and not just in terms of Kingsman.”

The film sees Taron play troublesome youth Gary ‘Eggsy’ Unwin, who Firth’s character, secret agent Harry Heart, owes a debt too. By giving Eggsy the chance to compete for a place in the Kingsman Academy, in turn keeping him off the street, they get even so to speak. So what was it like working with Firth? “He’s just an absolute dreamboat – he’s lovely and he was really good to me,” says Taron. “He went the extra mile to make sure I was happy and he treated me like an equal, which is ridiculous because he’s an Oscar-winning actor and I’d never made a film before.” But it wasn’t plain sailing for Colin either with Kingsman being his first foray into action. And as Taron puts it, it’s serious. “He’s so badass in it. You’ve never seen him like this before. We had loads of fight training and gym time, to ensure we looked like spies. We had a lot of time to get to know each other and I really hope that chemistry shows on-screen.”

Their odd coupling and dysfunctional father-son type relationship is precedent throughout, whilst the underlying themes of class tension, power struggle and self-belief also simmer on the surface. “Colin’s character always reiterates that being a gentleman has absolutely nothing to do with where you’re from or how you speak, it’s to do with how you act,” says Taron. “So there’s the whole rags to riches underdog story and the mantra – ‘It doesn’t matter where you come from, or how hard it is, you can do anything’”. A sentiment that proved true for Taron on many levels. “Every single one of those shots is 100% Egerton,” laughs Taron. “I’d never done any sort of scuba-diving before so my natural reaction when I’m underwater is to just freak out and take a huge lungful of water. It took a while for the whole mind over matter Zen thing to kick in.”

With such hard-hitting action stunts, I can’t help but ask if there were any notable behind the scenes mishaps, but Taron tells me there are none he’s allowed to talk about. Of course, a little probing can work miracles. “I can’t believe I’m about to tell you this,” he smirks. “I remember landing this massive jump I do at one point and my trousers basically exploded open as soon as I landed on the floor, in a scene filled with about three-hundred extras. I had to run out of the room covering my dignity. I’m supposed to seem all cool when I’m definitely not.” Well Taron, you had us fooled.