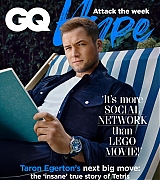 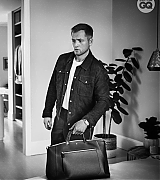 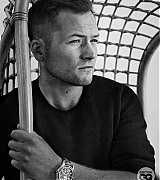 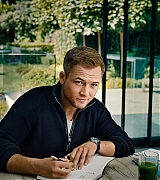 gq-magazine.co.uk – Days before lockdown, Taron Egerton and his partner, Emily, left London for Wales. Back to Aberystwyth, where he grew up, his family still lives and nobody cares who he is. “There were rumblings of martial law,” he remembers. “Tanks on the M4! And I started to believe it.” He was still in Wales when we spoke last week. “In some respects, it’s been lovely,” he says. “I devoured books.” He shows me a bookcase and raves about a local author, Niall Griffiths. He is a bit like Cormac McCarthy. He also read Emily St John Mandel’s Station Eleven, which is about a pandemic. Bit intense? “I had a panic attack reading it.”

Mostly, though, Egerton seems entirely calm. We caught up as Montblanc unveiled their latest campaign, What Moves You, Makes You, for which Egerton will start making his mark with the maison. Just a man in a black T-shirt and black cap, at his kitchen table on the other end of a chatty Zoom call, his life now is some shift from last year, when he was on a global gallivant to promote Rocketman, the Elton John biopic that dazzled with its invention and candid homosexuality. From that to… this. It must feel like a comedown of “Elton-in-the-1980s” proportions.
“It has felt like a nice antidote,” he argues. “As much as I enjoyed last year, with all the craziness, it’s nice to step away from the limelight. I’ve enjoyed being in my hometown. I feel like a member of a community. Rocketman was very exciting. I met Meryl Streep, Brad Pitt. But it’s good to get back to reality. I like being down the road from my mum. I like being down the road from my little sisters. It’s very important for my sanity. I love Hollywood, but I like to withdraw back to something that feels more normal.”

This year, Egerton was named a “Mark-Maker” for Montblanc. He likes the brand, from its pens to an 1858 watch that’s now in his collection. “It’s got a sense of history to it and a nifty means of distinguishing time zones,” he says, “which is lovely when things are busier. I’m constantly combating chaos in my life and Montblanc’s products give structure to what would otherwise be a whirlwind of creative thoughts.”
So he likes to write? “I do. And I hope to more in the future and to have my first go at directing. What I find, when you have luxurious products, is it reminds you to exercise a discipline in your creative life and have some order that begets creativity.” Will he write his proposed film out by hand then? “Well, actually, the thing I’m hoping to direct doesn’t have any dialogue in it.”