Written by Tiffany
Comments are off
Gallery Update Interview

Earlier today, Taron appeared on Good Morning America to talk about Robin Hood which is in theaters on November 21st! View the interview & pictures below! 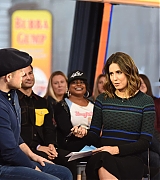 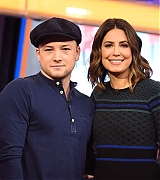 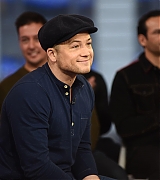 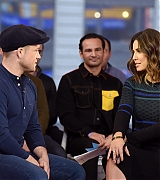 Interview: Robin Hood’s Taron Egerton on the pressure to diet for Kingsman and those Bond rumours 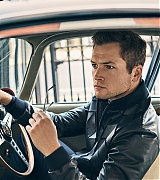 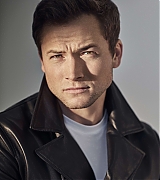 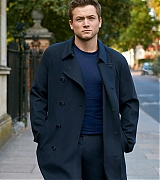 Telegraph.co.uk-Douglas Fairbanks, Errol Flynn, Kevin Costner, Russell Crowe, Taron Egerton. All superb Robin Hoods, in very different ways. Egerton, who is about to join their roll call with his gritty new Robin, in a film produced by Leonardo DiCaprio, does not wear Lincoln green, or go riding through the glen. ‘He doesn’t slap thighs,’ grins Egerton.

His Robin is more like an anti-capitalist protester, a hoodie-wearing corruption fighter with a multicultural team of Merry Men. And a kick-ass Maid Marian, of course, in Eve Hewson – who just happens to be Bono’s daughter.

‘It’s high octane and it’s fast and edgy,’ says Egerton, whose fingers are still calloused from all the arrow action. He learnt how to perform next-level archery. ‘I’d be holding up to five arrows in one hand,’ he says, adding that he’d be firing them while leaping through the air. Pretty impressive stuff.

Directed by Otto Bathurst, of Peaky Blinders fame, and filmed in Dubrovnik, this all-new Robin Hood transforms Sherwood into what Egerton describes as a ‘hotchpotch world where there are different skin colours and different voices’.

Relatable, likeable, funny, oh, and hot – Egerton, 29, carries the movie with ease. Despite having graduated from Rada on a seeming fast-track to fame, he is still finding his way out of the chrysalis, still blinking at his new-found success, surprised that designers such as Giorgio Armani want to dress him for events.

Still reeling, in fact, from meeting Mr Armani for the first time. ‘He grabbed me by the face and looked at me in the eyes for about 12 seconds,’ says Egerton. ‘Which doesn’t sound long but it was a long time. Then he just nodded. If I believed in spiritual experiences, that would be one.’

END_OF_DOCUMENT_TOKEN_TO_BE_REPLACED

Earlier today, Taron appeared on The Graham Norton Show to promote Robin Hood. The episode will be premiering on Friday on BBC One. 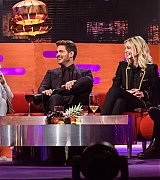 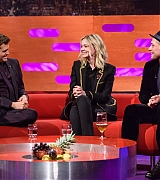 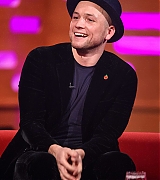 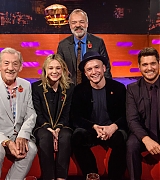 Taron Confirms He Is Not a Part of ‘Kingsman 3’

Comicbook.com – The first two Kingsman movies from Matthew Vaughn and Fox have focused on the adventures of outcast-turned-super spy Eggsy, played by Taron Egerton. However, the upcoming third film in the franchise won’t be following suit, and Egerton will not be involved.

During an interview with Yahoo! Movies UK ahead of his new film, Robin Hood, Egerton was asked about the third Kingsman movie, which was already reported to be a prequel to the first two. The actor quickly confirmed that Eggsy would be sitting this installment out.

While this may be disappointing to the fans of the franchise, Egerton goes on to explain that he isn’t done with the franchise for good. He and Vaughn still continue to talk about the future of Kingsman, and he plans on portraying the character of Eggsy again, it’s just that this new movie tells a different story in the Kingsman universe.

“That doesn’t mean I won’t be in Kingsman ever again,” Egerton confirmed. “I was with Matthew [Vaughn] as little as a few days ago, we’re still very much in business together, but his next journey in that world doesn’t involve me.”

Egerton finished by saying that Vaughn had told him the plan for the third movie, and that it was a very exciting premise, despite the lack of Eggsy.

“His idea for the new one is incredibly exciting,” Egerton added. “I’m sad that I won’t be on that journey with him but it’s not the last you’ve seen of Eggsy.”

Early reports regarding the new Kingsman film say that it will take place during World War I and that Ralph Fiennes will take on the lead role. This will likely help explain more about the Kingsman organization itself.

Still, as great as all this sounds, it won’t quite feel the same without Eggsy around. Egerton has exploded onto the scene since the first Kingsman film was released, and he’s nabbed a few major roles as of late. After his turn as Robin Hood later this month, the actor will portray music icon Elton John in the 2019 biopic Rocketman.

Taron attended the Global Education & Skills Forum 2018. On March 17th, he participated in the The Coffee House where he talked about his life, their work, and his commitment to education. He also appeared on GESF Live! on March 18th. 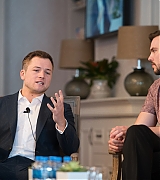 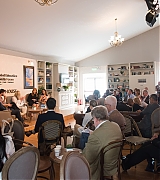 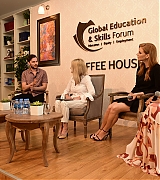 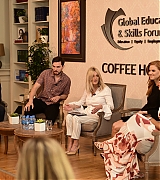 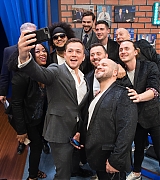 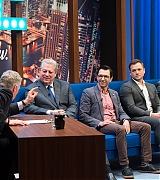 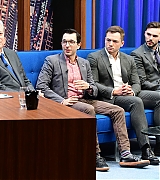 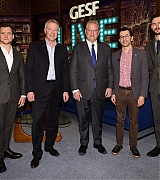 Written by
Comments are off
Interview

ENTERTAINMENT WEEKLY – Among other virtues, 2015’s Kingsman: The Secret Service clicked with audiences thanks to the rapport of delinquent-turned-debonair spy Eggsy (Taron Egerton) and his mentor Harry (Colin Firth).

Despite Harry’s apparent violent death, the duo reunites in next month’s even more berserk sequel, Kingsman: The Golden Circle. Egerton, 27, and Firth, 56, spoke to EW about their return.

ENTERTAINMENT WEEKLY: Did you both know that Harry was going to come back for a sequel?

TARON EGERTON: No, I don’t think anybody did.

COLIN FIRTH: [Director Matthew Vaughn] was very clear on the first Kingsman. He said, “Your character dies. And brutally.” There was no bailout clause. But then there began gradual conversations about how we could resurrect him.

What possibilities were discussed?

FIRTH: I’ll say that something which was never discussed was the idea of an evil twin. That’s a cliché. Plus, the purpose wasn’t to get “Colin Firth” back. It was about finding a way back to that relationship between the characters.

EGERTON: Exactly. Eggsy and his Obi-Wan Kenobi-type dad figure. We almost didn’t get enough of that in the first film.

How did your lives change after the first film?

EGERTON: I’d never been in a movie before. My life, from a work perspective, is unrecognizable. The change has been particularly profound.

FIRTH: I remember your first days on the set of Kingsman, telling me how everything was so new, and I said, “This is pretty new to me as well.” There’s something quite strange about me being an action star. I’m only beginning to realize at my age that you shouldn’t ever think you’ve reached cruising altitude. I did not expect to be over 50 and doing a film that was so physically challenging.

EGERTON: I’ve not really spoken about this because it wasn’t something I was very keen to reveal, but it’s in the trailer now. There are moments of us fighting side by side. On the first movie, prior to us actually shooting, there would be one of us walking out of a sweaty gym room, agonized, exhausted, while the other was walking in. One of us going, “Bloody hell, that was rough!” and the other one going, “Well here I go.” I guess the thing that was fun this time was that we walked into the stunt department together. And that was really fun.
END_OF_DOCUMENT_TOKEN_TO_BE_REPLACED