On September 3rd, Taron attended the GQ Men Of The Year Awards 2019 in London, England. Taron took home the Actor Of The Year Award for his role as Elton John in Rocketman and we couldn’t be more proud! See pictures in the gallery below as well as his acceptance speech. 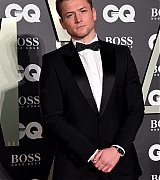 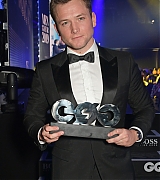 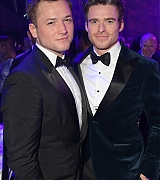 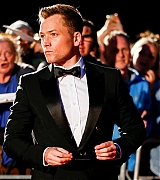 Written by Tiffany
Comments are off
Taron The King's Man

Comicbook.com – Kingsman star Taron Egerton expects production on the trilogy closer to get underway in 2020.

“So you have the King’s Man coming, which is a prequel set around 100 years ago, and I’m not in it. But I do know some stuff about it, and it’s really, really exciting, it’s got an amazing cast and it’s an amazing story,” Egerton said at ACE Comic Con Seattle. “And then I think — I think, think, think — we’ll be doing the final chapter in the Harry and Eggsy trilogy next year, I think, yeah.”

The King’s Man, directed by The Secret Service and The Golden Circle director Matthew Vaughn, extends the franchise when it releases February 2020. Vaughn previously said he hopes to enter into production by late 2019 or early 2020.

“We’ve got to finish off the Eggsy and Harry relationship,” Vaughn told Digital Spy of the mentor relationship between veteran spy Harry Hart (Colin Firth) and Egerton’s Gary ‘Eggsy’ Unwin.

“The final chapter of their relationship needs to be told, which we’ve got ready to do, and I’m hoping to shoot that later this year or the beginning of next year.”

Egerton’s return to the action-packed franchise is a welcome one, as the star felt emotionally drained from portraying Sir Elton John in Vaughn-produced fantasy musical biopic Rocketman.

Variety.com -Elton John biopic “Rocketman” has been set for a May 16 world premiere at the Cannes Film Festival.

The film, written by Lee Hall, covers John’s emergence as a prodigy at the Royal Academy of Music to becoming a music superstar and his partnership with songwriting collaborator Bernie Taupin. John broke out in 1972 with the album “Honky Chateau” and scored a blockbuster with the 1973 album “Goodbye Yellow Brick Road,” which topped the charts for two months in the U.S. and U.K.

Paramount has a domestic release date of May 31. The studio showed footage to the media and exhibitors at CinemaCon in Las Vegas and a Troubadour Hollywood event.

“We are incredibly honoured and excited to premiere our movieRocketman at the Cannes film festival onMay 16th. This has been a labour of love for all of us and we couldn’t dream of a better launching pad for this very special film,” said Rocket Pictures and Marv Films in a statement.

Written by Tiffany
Comments are off
Dark Crystal Taron

Hollywoodreporter.com – Taron Egerton, Anya Taylor-Joy and Nathalie Emmanuel will play the lead roles and be joined by a host of other actors.

Dark Crystal: Age of Resistance is based on Jim Henson and Frank Oz’s 1982 movie and set many years before the events of the film. Egerton, Taylor-Joy and Emmanuel will lend their voices the heroes of the story, Gelflings named Rian, Brea and Deet. With their planet, Thra, dying, they set off on a quest to reverse the sickness and come into conflict with the evil Skeksis.

Taron Confirms He Is Not a Part of ‘Kingsman 3’

Comicbook.com – The first two Kingsman movies from Matthew Vaughn and Fox have focused on the adventures of outcast-turned-super spy Eggsy, played by Taron Egerton. However, the upcoming third film in the franchise won’t be following suit, and Egerton will not be involved.

During an interview with Yahoo! Movies UK ahead of his new film, Robin Hood, Egerton was asked about the third Kingsman movie, which was already reported to be a prequel to the first two. The actor quickly confirmed that Eggsy would be sitting this installment out.

While this may be disappointing to the fans of the franchise, Egerton goes on to explain that he isn’t done with the franchise for good. He and Vaughn still continue to talk about the future of Kingsman, and he plans on portraying the character of Eggsy again, it’s just that this new movie tells a different story in the Kingsman universe.

“That doesn’t mean I won’t be in Kingsman ever again,” Egerton confirmed. “I was with Matthew [Vaughn] as little as a few days ago, we’re still very much in business together, but his next journey in that world doesn’t involve me.”

Egerton finished by saying that Vaughn had told him the plan for the third movie, and that it was a very exciting premise, despite the lack of Eggsy.

“His idea for the new one is incredibly exciting,” Egerton added. “I’m sad that I won’t be on that journey with him but it’s not the last you’ve seen of Eggsy.”

Early reports regarding the new Kingsman film say that it will take place during World War I and that Ralph Fiennes will take on the lead role. This will likely help explain more about the Kingsman organization itself.

Still, as great as all this sounds, it won’t quite feel the same without Eggsy around. Egerton has exploded onto the scene since the first Kingsman film was released, and he’s nabbed a few major roles as of late. After his turn as Robin Hood later this month, the actor will portray music icon Elton John in the 2019 biopic Rocketman.

thewrap.com – Paramount Pictures has dated Taron Egerton’s “Rocketman” for May 17, 2019.

Directed by Dexter Fletcher, the film got a finance and distribution deal last month. Egerton portrays John in the various stages of his legendary life. Lee Hall wrote the script for the package, and John is producing with Marv Films and Matthew Vaughn alongside John’s Rocket Pictures partner and husband David Furnish.

Egerton is set to sing John’s songs himself, with production set to begin in August.