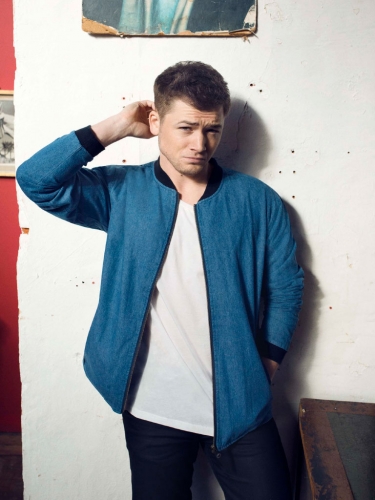 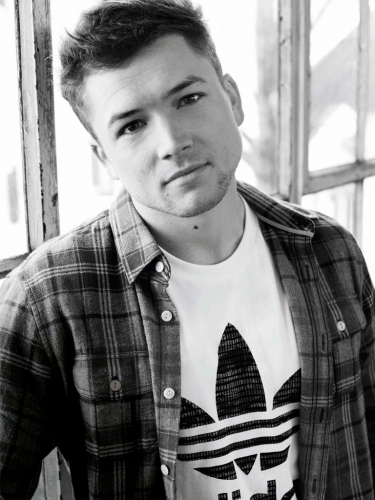 Lead roles with an Oscar winner, pep talks from Tom Hardy… If you judge an actor by the company he keeps, then get ready to rave over Taron Egerton

FIT!’ ‘Fiiiiiiiit!’ ‘Oh my god, he issooo fit!’ A pause. ‘Who is he?’ Not that we objectify in the ASOS office, but if you’ve seen the trailer for Kingsman: The Secret Service, you’ll understand our reaction.

‘He’ is Taron Egerton, 25-year-old star of Matthew ‘Kick-Ass/X-Men’ Vaughn’s new spy movie, co-starring Oscar-winning Colin Firth. The film involved months of stunt training and got Taron a sandwich made by a supermodel [Vaughn is married to Claudia Schiffer].

If comic-book adaptation Kingsman didn’t pluck him from obscurity [he had been on Sky 1’s The Smoke and mum faveInspector Lewis], it did kick-start his career. His next movie is Legend with Tom Hardy, while last month saw the release of London Film Festival smash,Testament Of Youth.

‘Matthew Vaughn has strapped a career jet pack to my back,’ Taron laughs, with a tea in hand, after our shoot. He fought off competition from Jack O’Connell andStar Wars’ John Boyega for the role of ‘Eggsy’, a troublemaker turned super-spy. ‘I was the underdog because I’d done so little,’ he says, ‘but I was probably cheap so it makes sense! It’s happened so quickly that my brain is catching up with it. I’m being cool about it because it feels like it might all be taken away.’

In person, he’s a surprise. His Kingsmanrole is pure rudeboy – snap-backs, bombers and attitude – but today, he’s in a T-shirt and a shearling denim jacket with shorts. His accent has a Welsh lilt, with none of his character’s urban twang, and as opposed to being a bit naughty, he’s really nice. ‘I keep playing troubled young ruffians,’ he grins, ‘which is ridiculous, because I’m nothing like that. But I listened to loads of Plan B and revisited Noel Clarke and Riz Ahmed films. There’s a swagger to those lads. It gives you an idea of the attitude you need.’

He also had a lot of help finding his way around his first film set from Colin Firth. ‘I could go on about how much I love Colin Firth, but I’ll sound like a fan boy,’ he grins. ‘When we were working, he always made the effort to make sure I was coping OK.’

Tom Hardy, his Legend co-star, while less demonstrative in his affection, was equally important to Taron. ‘Tom keeps one foot in character while filming,’ he explains, ‘so he adopts some mannerisms, which is quite frightening when he’s [60s gangster] Ronnie Kray, but he took the time to get to know me and was supportive. I’ve been lucky to come into contact with two actors who are different, but equally brilliant.’

Taron moved from his home town of Aberystwyth in Wales to London five years ago to study at RADA, the acting school that Tom Hiddleston and Ashley Madekwe attended. Until a year ago, he’d never been to America, now he’s been to L.A., San Diego and New York. It doesn’t look like the big time’s going to entice him Stateside though. ‘Wales is the centre of my universe. I go home once a month,’ he says. ‘My mother has a four-year-old and a one-year-old [cue swoonsome phone pics] and so my family are a big part of going home.’

KINGSMAN: THE SECRET SERVICE IS RELEASED ON 13 FEBRUARY

YOUR FAVOURITE NIGHT OUT…

‘Dance and get sweaty in Rummers in Aberystwyth, then a pub crawl.’

WHO WOULD YOU BE ON STARS IN THEIR EYES?

‘George Michael. I’d do Faith because it’s my karaoke song.’

WHAT ARE YOU A GEEK ABOUT?

‘When I was in my early teens, I went through a stint of doing Lord Of The Ringswar games.’

‘Cats. For years, I pretended I didn’t like the smell of dogs, but I’m just frightened by them.’

WHO’S THE MOST FAMOUS NUMBER IN YOUR PHONE?

‘Colin Firth, but he’s under a code name.’