Over 70+ pictures of Taron on set of Tetris on February 21, 2021 in Aberdeen, Scotland have been added to the gallery. 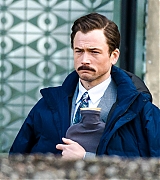 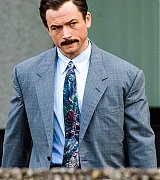 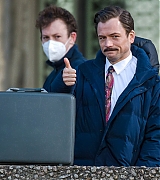 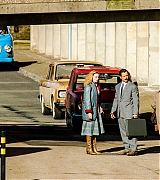 deadline.com – “Tetris: The Movie,” a film starring Taron Egerton about the making of the iconic block video game, has slotted in perfectly at Apple TV+, the studio announced Thursday.

Jon S. Baird (“Stan & Ollie”) is directing “Tetris: The Movie” about how the game found its popularity on consoles and the legal battles that a Dutch game entrepreneur, Henk Rogers as portrayed by Egerton, had to navigate to help the game find a foothold. Noah Pink (“Genius”) wrote the screenplay.

The film is being produced and financed by Matthew Vaughn’s Marv Films, with Leonard Blavatnik’s AI Film. Producers also include Gregor Cameron via his banner Unigram, which has tied up with AI Film (this is the first project from that pact), and Gillian Berrie. Screen Scotland helped bring the production to the country.